A while back in a different German post on this blog I wrote about some issues with DHL delivering packets to our address. Instead they always dropped them at the same neighbor telling him we were not at home, which tuned out to be nothing else than a big dirty lie.

During the last two months our neighbors that live on the same floor and we took part in the next episode of DHL’s game “cheating on neighbors”. Here is the full story:

Our neighbors bought some stuff from an Amazon marketplace shop. After the package did not arrive within the expected period, they looked up the status on the DHL package tracking site to figure out where it got stuck. To their surprise the DHL package tracking site told them, that it was already delivered to guess who: US! So they asked us about the package they awaiting. Unfortunately we couldn’t help them, as we never received the package and at least I had a good alibi of being over 150km away from home by bike the day it was delivered to us as being recorded in DHL’s tracking system. Luckily we get along very well with our neighbors, so they fully believed in our statement not having accepted such a package. We both agreed that it would be best to request all delivery information from DHL including the signature of the person who accepted the package.

It took some time as this information can only be requested by the sending party which was not very cooperative. When it finally arrived it was funny and terrifying at the same time: The signature was not even close to mine or my wife’s. Yes right: the delivery boy really tried to fake our signature and probably dropped it in someones trash. U-N-B-E-L-I-E-V-A-B-L-E, isn’t it?!

I received a call from DHL this week that they will do anything to prevent such a thing in the future and fortunately Amazon did a refund, although it was bought trough a marketplace shop and not Amazon directly. 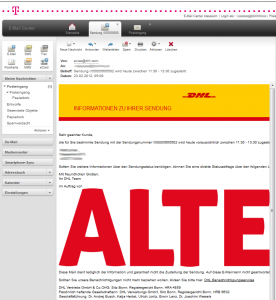